My friend Rezza has died.  She got her unusual name when she married her third husband, Simon, who did not like her name Blanche at that time, and renamed her Rezza from the the musical term ‘tenerezza’, meaning  ‘with tenderness.’

She was 93 when she died, a good age, but she had seemed indestructible. Even when her daughter rang me about two weeks before her death, she called out from her bed:

I almost believed her, after all, she had cured herself of cancer by going on a carrot juice diet, thus depriving the cancer of anything it could feed on. She knew everything there was to know about diet, and about her own body, just as she knew everything about plants and how to grow them, and their values and properties.

It is still early days,  and it has not quite registered that I will no longer be able to ring her and hear her familiar voice:

and then have a long conversation lasting about an hour, during which time we will discuss everything, from the state of the world, old books we have both read, her children, my writing, from which I will always emerge feeling refreshed, energised, and full of hope again. She has been a lifesaver in my life for so long. How will I survive? I almost felt I wanted to die too when Rebecca said:

I first met Rezza in the 1970s when I was living in Brussels. I was going to the School of Philosophy and my friend Rozel had met her, then named Blanche, at a health spa in England, and had invited her over to Brussels.

I was very shy, retiring, and very earnest. Rezza knew how to penetrate my defences. She was a natural chatterbox and communicator, lively but at the same time intuitive, generous and kind. She made me laugh, she knew about books, she gave me advice on diet, about which she knew a great deal. She was deeply spiritual, but not in any conventional sense.

“There is no security in life” she said, “you must not hang on to anything.”

We became firm friends, and she became my confidante, my mentor and guide. Five years before I retired I was able to buy a small house in Bath. She visited me there, the house was unfurnished apart from two camp beds and a bean bag. We would sit in the front room by the gas fire and she would talk about Simon, whom she had just met: she was madly in love with him and trying to resist it. He was a priest. I was in love  with my boss, who was a married man. We confided in and commiserated with each other.

Rezza married Simon. They had met whilst both of them were doing charitable work looking after the disabled. He was very musical and had a beautiful voice. It was his voice that she fell in love with, she said. He also had psychological problems and Rezza was determined that she could cure him, through diet and her loving care. She was sixty and he was five years younger, they were like a couple of teenagers together. She rode a motorbike and he was a crazy driver. He drove her everywhere at great speed, to Devon and Cornwall, along the rocky coastline, and to Dartmoor where they went for long walks, and talked and talked. Rezza loved it all.

When I retired back to England in 1989 I would visit them. Simon was now a priest in Sidbury in Devon. He was not a conventional priest, which upset some of the older members of his congregation, but he was a very caring man and soon gathered a devoted group of old ladies around him, which made Rezza laugh. She herself never played the role of vicar’s wife.

Wherever she lived Rezza had a garden, where she would grow flowers, vegetables and herbs. She was a vegetarian and cooked beautiful vegetarian meals, which she made Simon eat, though I think he often enjoyed meat when he was out with his parishioners.This would upset her, as she had very firm ideas about diet and food values and what was good for him.

Rezza loved nature and all growing things, she had a natural affinity with the earth,and a sensitivity to plants and flowers and trees. She communicated with them.She was never happier than when out in her garden, digging and planting. 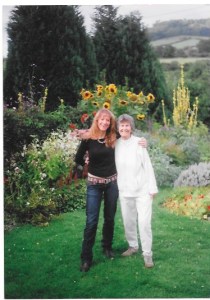 Rezza with her daughter Rebecca in her garden. She was about eighty.

After I retired I visited Rezza often, driving down to Devon in my red Vauxhall car.

Rezza and Daphne. We looked like sisters, which Rezza said we were.

Over the years Rezza’s life changed and became more difficult. Simon retired and they had to move from their lovely home. Then he became ill and Rezza, now in her eighties, could no longer look after him. They moved down to Ditchling, near Rezza’s daughter, Simon in a home, Rezza in a small, dark, damp flat, which was all she could afford, no garden.

She did still have her allotment, nearby, where she used to go every day to care for her precious plants, and then two allotments, one for her daughter. She was delighted when she received the silver cup for best allotment, two years running!  She no longer travelled. Every day she would visit Simon, who was still angry with her for having him put in a home, which hurt her deeply.

I phoned every week, she was always cheerful, and funny, with the occasional moan, inevitable in the circumstances. We even talked of trying to live together in a retirement home, but I knew in my heart it would not work.

The last time I saw her was three years ago, when she was ninety. I travelled down to Ditchling and stayed in a b&b.  She was wafer thin, her eyesight was very poor, we walked slowly over to her allotment and sat there, in the sunshine, in companionable silence.

A short time after I heard she was giving up her allotments. This was a great grief to her, they were her lifeline, but she could no longer see to cross the road. Then Simon died, after six long years in a home in a vegetative state. In one sense it was a release for him, and for her a shattering loss.

Last June, when the country voted for Brexit, Rezza finally had to leave her flat as her landlady had decided to sell it. Another flat was found which seemed ideal, a granny flat on the ground floor, with a garden, in a private house. It was the beginning of the end. Rezza, now blind, was finding it difficult to cope in her new surroundings. She was no longer in charge. Whenever I rang, our conversations became shorter and shorter. The last time I spoke to her was just before Christmas.

Rezza died on the 17th January, in her own bed, peacefully, her son and daughter by her side, of old age.

She was a remarkable woman. She was born in the East End of London, a real cockney girl with a love for dance. I can imagine her, a wild bright child, dancing round the streets. Somewhere along the line she lost her cockney accent.

She was a land girl during the war, then she trained to become a teacher and taught small children. She married three times, she was too young the first time, she said. In those days she was a communist and her second husband, was a high ranking Communist official. She had two children with Harry, a boy and a girl. The marriage did not last  and they divorced. When I met her she was bringing up her children on her own.

Her health suffered and she consulted a naturopath. Dr. Latto. She began to study diet, she became a vegetarian and started to advise others on their health problems. Whatever she did, she did thoroughly. She found her spiritual path through Ken, a master, a teacher, who lived in Wales. She attended his groups and followed his teaching from then on. She studied yoga and became a yoga teacher.

Rezza at 80 in front of the apple tree

All the time I knew Rezza she never read a newspaper, never listened to radio or watched television. She had her books and her record player. She knew what was going on in the world, she said. She introduced me to new writers, Jacob Needleman, Ken Wilber, she gave me a copy of Rilke’s Book of Hours. We had both read and loved Charles Morgan in our youth, a sign of our age!

She had a favourite poem, called My Body Effervesces by Anna Swir.

This was how she was, a bright and free spirit.

When she could no longer read, she relied on her spiritual practices, a combination of physical, mental and spiritual meditations, to maintain her equanimity and balance. Even though she was now almost blind, she was still able do her own cooking  and move around in her small flat.

One of her favourite authors was Edward Monckton, a comic poet and writer. She would quote him often.

That is how I shall remember her, laughing, happy and free.

Rezza at 93 in lotus position